How Do You Write A Good Script? 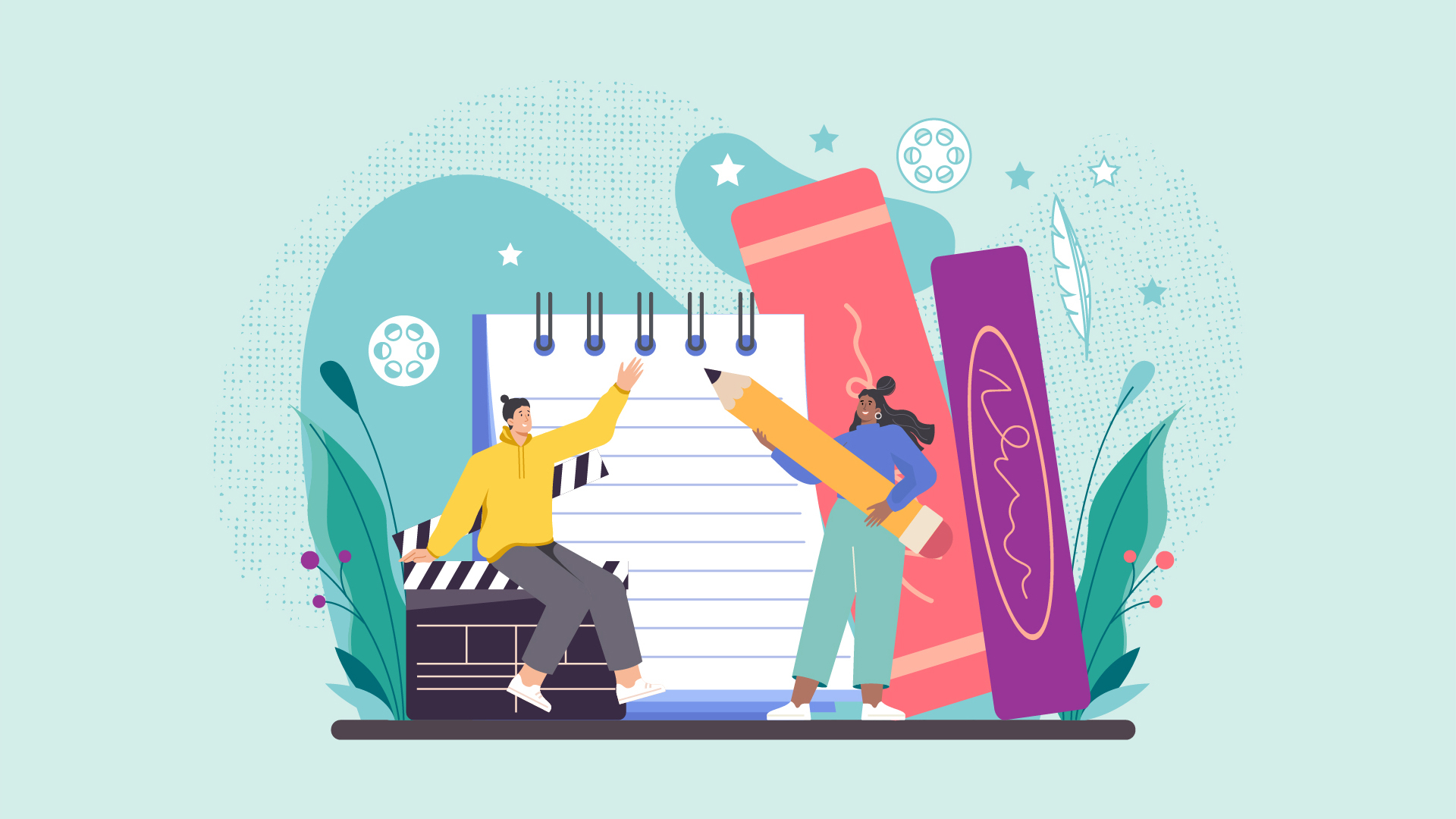 How Do You Write A Good Script?
If you're reading this article, I guess you want to know more about the screenplay and get tips for writing a good one. But to begin with, let's figure out what it is, and what its role is in the cinematography industry?

What Is A Script?
In simple words, the script is a structured plan of a play, movie or show which includes all the details that are followed during its shooting. The scriptwriter's task is to write all the dialogues, actions, locations, and characters. It is the first and most important stage that influences the further process of media creation.

What Is The Purpose Of A Scriptwriter?
The author of the novel tells us the story in all the details that help us to imagine it in our head, but when it comes to script writing, your task is to show the story, not to tell it. Screenwriters prepare their script in such a way that readers can imagine the setting, emotions, and how they will work on the screen. They cooperate with producers, directors, and actors to compose and rewrite the script, often working to tight deadlines.

“It's possible for me to make a bad movie out of a good script, but I can't make a good movie from a bad script,” says filmmaker George Clooney. So, how do you write a good one?

Since the script is the fruit of your imagination, it requires a creative approach. The writing process, amount of time, and specifics of the creation are very individual. There are no clear instructions or certain rules that will suit absolutely everyone, but we prepared some tips that will help make it easier for you.
Write Down A Short Plan

Do you have an idea? Sounds great! But before turning it into a script, note the main elements:

How To Make It Professional and Sellable?

1. The Three-act Structure
If you’re into cinema, you probably heard that many films were created by following this structure. Of course, it’s not a rule, because many masterpieces of cinematography were created without this technique; however, it is good for beginners who do not understand how to structure the material. So how does it work?

Act one
During the first act, we demonstrate the main characters and the conflict of the plot. This is the moment when you should hook the audience and make them care. Usually during this act, the main character faces a problem that he has to solve by the end of the film.

Act two
In the second act, the heroes face a lot of problems, and while the villains successfully win, it would seem that the situation is hopeless. But in the first and second acts, there is always something that later will help to resolve the conflict.

Act three
In the third act, characters change, accept the challenge, and ultimately overcome the circumstances that threatened them. They accept the main challenge of the film and make decisions that reshape the plot.

Fortunately, many software programs contain functions that will help you format your text, the form, font, paragraphs, and intervals can be automatically adjusted. But it's much more convenient to apply all these functions in one program, right? We have made sure that our makestoryboard users could not only write a script, but also set the type of shot, musical accompaniment, and number of actors.

Have you completed your first script draft? Awesome! You probably have two or three more to go. Read your work slowly and patiently. Check grammar and spelling. Challenge yourself with questions. Does this story make sense? Are these jokes funny? Will people buy this plot twist? Ask other people to read it. Ask them to be ruthless and take lots of notes. Consider all of them seriously.

Don’t watch movies like the ordinary viewer, but analyze what you see. After watching the movie you can read the script, as they are usually available to everyone. You can also choose any scene from the film and write a script by yourself, then compare it with the author's original one.

5. Write A Dialogue With Emotion

Characters shouldn’t be saying exactly what you want your audience to know, they should translate emotions, so note their facial expressions or body language and put that in the description part of your screenplay. Do not use banal phrases and clichés, but pay attention to their interaction with the environment and behavior.

6. Find Your Source Of Inspiration

To create something new, you need to experience something new yourself. It is not necessary to take extreme measures. The main thing is to find what works for you. Maybe a change of work environment? New acquaintances? Or watching classic cinematic masterpieces? This will not only help make an emotional release and broaden your horizons, but also look at your script from a different angle. 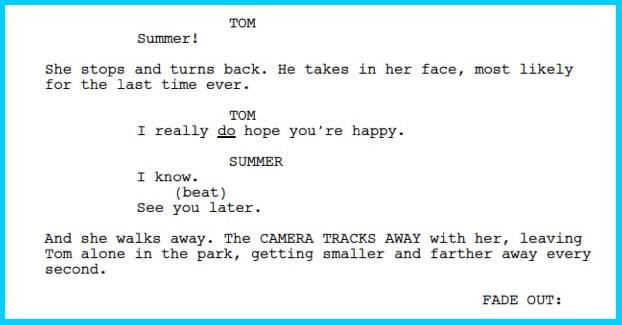 500 DAYS OF SUMMER written by Scott Neustadter & Michael H. Weber
After reading this, you most likely already felt the drama of this scene. It means that the author did a good job because it made you feel something. While diving into the writing process, do not forget to look at the script from the viewer's angle. Emotions affect the audience's final impression, so whether you're working on a five-minute commercial animation or on a global film project, think about the target audience and how you can affect them.

8.Expand Your Knowledge
The art of cinema has evolved over the years. Many artists have shared their secrets and techniques in books. Read about scriptwriting, and you will learn something that you did not know before, who knows, it may drastically change your approach.

Here are 5 books worth reading:

Although the work process can sometimes be challenging, you can always adjust it to suit yourself. Don't forget to get enough rest and create your own writing routine that suits you. Learn more information for creators in our blog and bring your ideas to life with makestoryboard!