How Video Games Are Really Made

In this article, we will look at what is going on within the gaming industry, what the gamedevelopment pipeline is, as well as the steps of the pipeline. The game development pipelineis the process of building a video game from concept to completion. 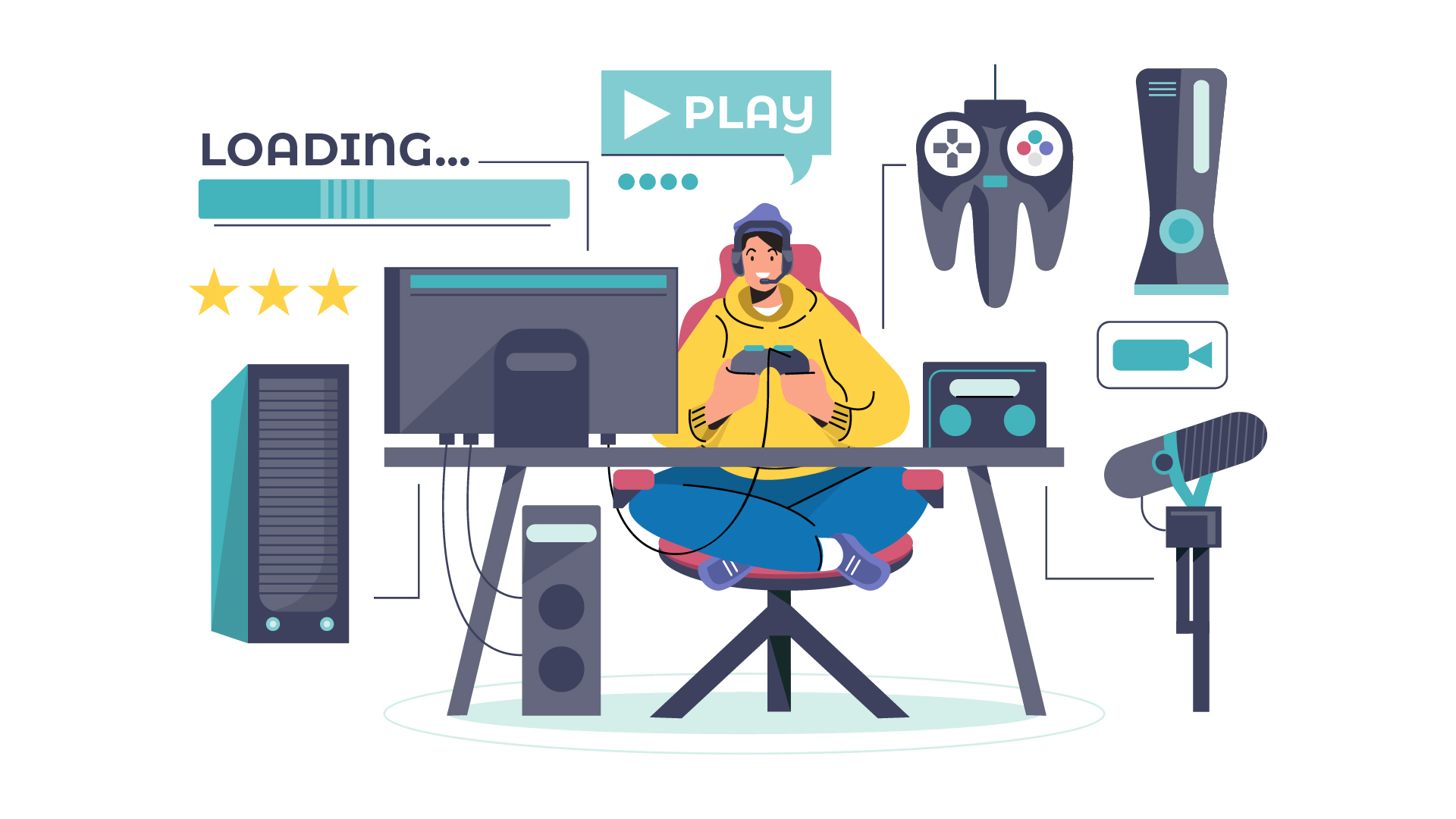 What is going on within the video gaming industry?

The video gaming industry quickly became a booming business with the start of technological progress in the 80s. During these times, arcade machines with retro games, such as Pac-Man, and consoles like Sega were introduced to the public. This phenomenon created a new subculture known as gamers.

The technological advancement didn’t stop there. Gamers were seen as a great audience to work for. Video game companies, gaming manufacturers, and publishers saw an incredible opportunity in developing the new world of entertainment - gaming itself.

We all enjoy a good gaming session with our friends, or just to play alone to relax and have some fun. There are not many of us that really ask these questions: How are video games made? What makes video games so beautiful and addictive? What do developers use to create games we spend hours playing?

Let’s dig into this further and find out!

In order to make a decent product, it should go through three stages: pre-production, development, and support. This is called “the game development pipeline” - a detailed plan on how to make a game. Most developers use storyboards for the pre-production process.

It’s useful in planning the exact date to finish production, budget costs to produce the video game, and how much effort it will take to bring this game idea to reality.

A storyboard is a visual organizer for making a narrative. This is an effective way to graphically communicate information, explain processes, and display the passage of time to your team.

Simply put, it’s a collection of drawings that tell the story, share a development plan, and break down tasks one by one in order to achieve the dream goal.

No matter the size of the project, gaming companies are using storyboards to develop video games. These pipelines have different variations with more flexibility, but that’s another topic to discuss at a later date.

During the preparation stage, creators work together to plan the steps to achieve their goal of making a video game.

Ambitious ideas should be recorded responsibly. It is crucial when answering questions such as: What is the video game about? Who is going to be the main audience? What technologies should be used to produce a high-quality product? What is the budget for it? And most of all, how can you monetize this game?

A lot of time should be spent at this period because it is the most important part of the pipeline.

The whole project development is planned at this step. The work completed at this step decides whether or not the project is going to be successful and profitable, or a costly failure.

Team members play a huge role in the preparation stage. Video game producers must evaluate the budget for the project, the concept artist should spark his or her imagination and creativity to show what the game will look like, and developers will create a prototype to see if the project can be successful.

Imagine that you need to prototype a cutscene of your video game that will be shown to the investors, and you need money to continue your work. This cutscene needs to show the flow of the story, how characters communicate with others, and what the characters say and do in the cutscene - all of these are key elements in the success of the video game.

Storyboards are there to help you once again. Showing off a cutscene that will leave your investors speechless is indeed a hard task, but storyboards can help you make your dreams come true. In addition, you can make numerous attempts without them being costly.

You’ll be able to find a better angle for the cutscene, write down the dialogues of your characters, what their movements are in a particular scene - all to convey the importance of the scene and how this video game stands out from the rest of the video games already in the market.

It’s also beneficial to you and your team. Storyboard software has come a long way in its development and you can now provide feedback or tasks to your designers and producers in the software itself. Constant communication with your team is proven to be successful in working effectively and making your dreams a reality. With the right software, it’s an easy and achievable task to make your project truly stand out.

Ideas, roles and, especially, costs must be stored in a specific document called the game design document - GDD, in short. It contains the idea, genre, gameplay, design, project scope, budget and storyline. This document keeps your crew organized and lets you see the main goal of the project. It should be updated on a regular basis as the idea might change, as well as the budget. If you aren’t using this document, you can expect your project to run out of budget and fail.

Many great companies such as Naughty Dog, Mojang, or EA cannot imagine their success without this document, which is why they’re dominating in the modern world of video games!

This is where the fun part begins!

Consider this to be the longest stage of production. It takes time to make a good product and this is the period where the production must get the most out of it.

Everybody on the team is held accountable within their individual roles and they must cooperate with each other in order to make the product appealing to the audience, as well as the  investors.

Who are these people then?  Project managers!

Ah yes, the people who bosses everyone around, which we love! They are the key players in the communication between the departments, asserting priorities, and they are responsible for making sure everything meets their deadline, and they mitigate any risks involved in the production.

Project Managerse sure everything works as it is supposed to.

Game artists bring your imagination to reality. They’re bringing colour to the game and seeing how it looks for the project.

Designers use really expensive software to prototype, make mistakes, and then redo everything from scratch. It’s not an effective method of managing your most valued resource - time. Money too, but mostly time.

Designers should have a plan, too. In storyboard software, you’re more than free to draw anything you like, export other pictures and models to see how the scene will play out. This allows you to learn what you need to do so repeat mistakes aren’t made, and it will improve the look of the scene.

With the right person, great projects are made.

There are different artists, such as concept artists, 3D modelers, or FX artists, and each one of them has specific tasks to accomplish.

Concept artists design the first look of the video game, its story, locations, people, tools, etc. These concepts are mostly done in 2D and these elements are used to let the team see how the project must look in the end, or to evaluate the look of the video games, and make other decisions on how to improve it.

However, 3D concept artists create 3D assets and elements for the video game. They’re responsible for the environment of the game, as well as the textures and details.

Developers help with the animation, concept ideas, and/or 3D models of your video game, e, but they can’t be successful without the work of software developers who implement these objects into the game and make them function.

Things such as creating physics, implementing game mechanics, and adding sound effects are done by the professional hands of developers. They’re the pillar of the project.

Game designers and producers - This is where it gets interesting!

If your video game is going to be featured with the storyline and characters, then these guys are the drivers of this aspect! Their area of interest in developing the storyline which introduces people - the characters that we fall in love with, writing scripts, and filming cutscenes.

Cutscenes are necessary to show the progress of the video game’s story, character development ,and emotion.

Of course, they all rely on the storyboards.

The Role of Storyboarding In Video Game Production

Simply put, they’re here to illustrate the director’s vision of a script. The Director tells you how he sees the scene playing out, and the artist should listen to his ideas and preferences and make images of how it will look like.

At first, it’s tempting to go into the video game design process headfirst when your mind is full of many ideas on how to show this or that. But there’s a catch. Like in our life, you cannot start working on something important without making some video game design plans or documentation. Just having a plan makes your work go a lot smoother.

This is why storyboarding exists.

Storyboarding is the process of turning your innovative gameplay concepts into a visual storytelling format. It is extremely helpful if you have detailed steps on each specific visual scene. Before you enter into prototyping or production, it’s best to start with storyboarding as it helps you understand the clear picture your game will have.

In a professional way, you’ll be able to discover any holes in your gameplay and storyline, and construct plot elements to address any flaws or add depth to the game. For what purposes? To minimize your risk in the pre-production period, spend much less time prototyping and re-working and, surely, save some money.

It’s time to show off the product!

After the production is completed, the video game is released, and the team can rest and eat the fruits of their labour. However, some of them keep working on the video game as it needs regular updates, bug fixes, patches, etc. If the product proves to be successful, the team can make additional content for the gamers which will make the company more money and notoriety. The pipeline repeats as well.

After some time, the mistakes and losses can be written down and much can be learned  in order to avoid problems in future games if the company has plans to develop more.

Also, all of the documentation, including designs, elements and codes, can be preserved for future use.

You can’t imagine a storyline without a storyboard

Now you have a brief explanation of how video games are made, starting with writing documentation and ending with keeping your video game up-to-date.

And you learned how storyboards are playing a huge role in video game production with a breathtaking storyline and fascinating characters. Congrats!

Video games are just the tip of the iceberg when it comes to storyboarding. Imagine the possibilities in cartoons or filmmaking!

Storyboards became an essential element in the production of entertainment content which shouldn’t be missed at any cost.